View My Gallery
A few months ago I came across a Fuji Instax Mini 9 camera in Aldi while I was grocery shopping. I bought it on impulse, figuring if I didn't like it I could probably sell it, and if not then USD$25 wasn’t that much to lose. The relatively low cost of Instax mini film compared to other instant film formats was also tempting. I chose yellow over pink, the only two colors available. It looks like a toy, which I see as an advantage. It’s the most non-threatening camera imaginable, save perhaps a Barbie camera. I can’t think of anyone who would take it seriously.

I’ve started this thread to share my experiences. I’ll keep adding pictures as I go along, and I'll also add them to my RFF gallery instant film album, which also has instant pictures from other formats.

View My Gallery
The camera.* 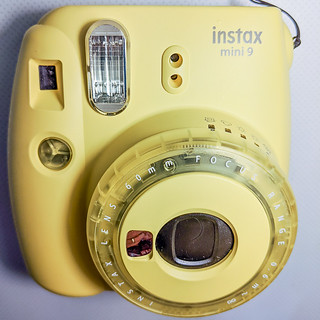 The Mini 9 is an entry level camera that uses Fujifilm Instax mini film, producing an image size of 6 x 4.5cm. You can read the specifications here. It’s got a simple 0.37x viewfinder, a 2-element plastic 60mm f/12.7 fixed focus lens that focuses from 0.6m to infinity, a fixed 1/60 shutter speed and the flash always fires. It has an exposure meter that lets you know which aperture to select from f/12.7 to f/32. Apertures are selected by symbol instead of f-number. The exposure meter lights a small LED next to the suggested aperture. Instax Mini film is ISO800 and is available in color or black and white; there’s 10 prints to a pack.

*should read "the first camera", because since buying it I've acquired an Instax Wide 300 and an Instax SQ6 (square)... more on them later in the thread.

The first pack of film delivered some pleasant surprises. Forget sharp, this camera is more Impressionist in its dreamy rendering - I didn’t expect much from a simple 2-element plastic lens. But I liked what I saw. This is the very first picture I took with the camera: 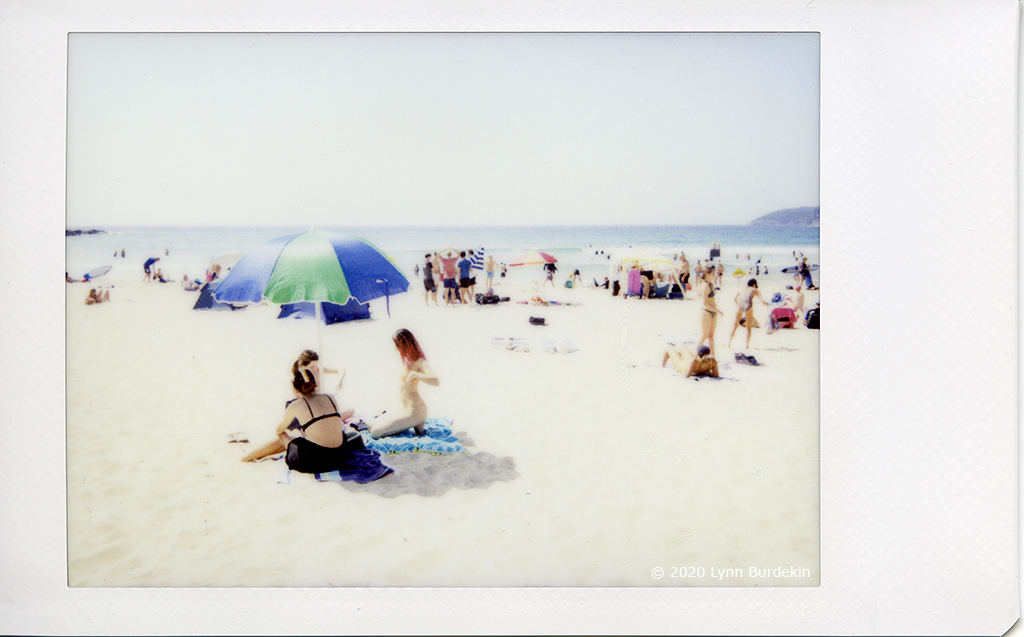 Please excuse the Newtons Rings scanner artifacts. I've scanned the prints using an Epson V700 scanner. Some sort of print holder that slightly lifts the print off the scanner glass would resolve this. I haven't got around to that yet - having too much fun taking pictures

View My Gallery
Here's picture #2. I like the color and the high key effect. With ISO800 film the recommended exposure at the beach would be around 1/800 @ f/16. This camera has a fixed shutter speed of 1/60 and a smallest aperture of f/32 (which I selected) so it's about 1.5 stops overexposed. 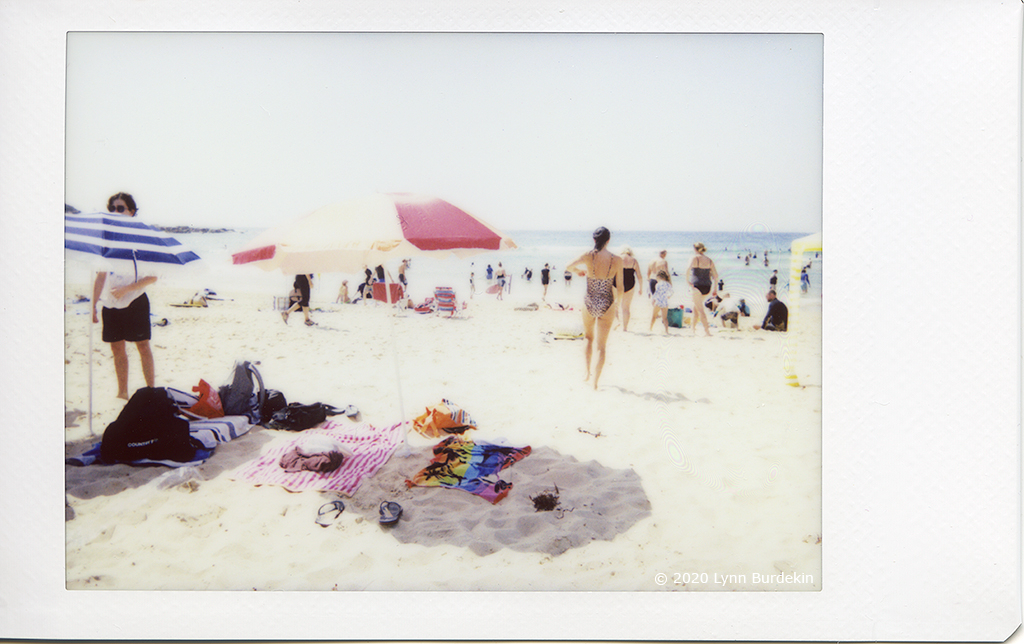 View My Gallery
Pictures #3 and #4. I found that fairly aggressive unsharp masking in Photoshop can bring out more detail without producing noticeable halo artifacts. On these scans I used USM at 100% with a radius of 1.0 pixels. Later on I found 100% at 0.5 pixel radius done twice produced a slightly better result.

These are taken at my local beach at Freshwater, in Sydney at the end of summer. 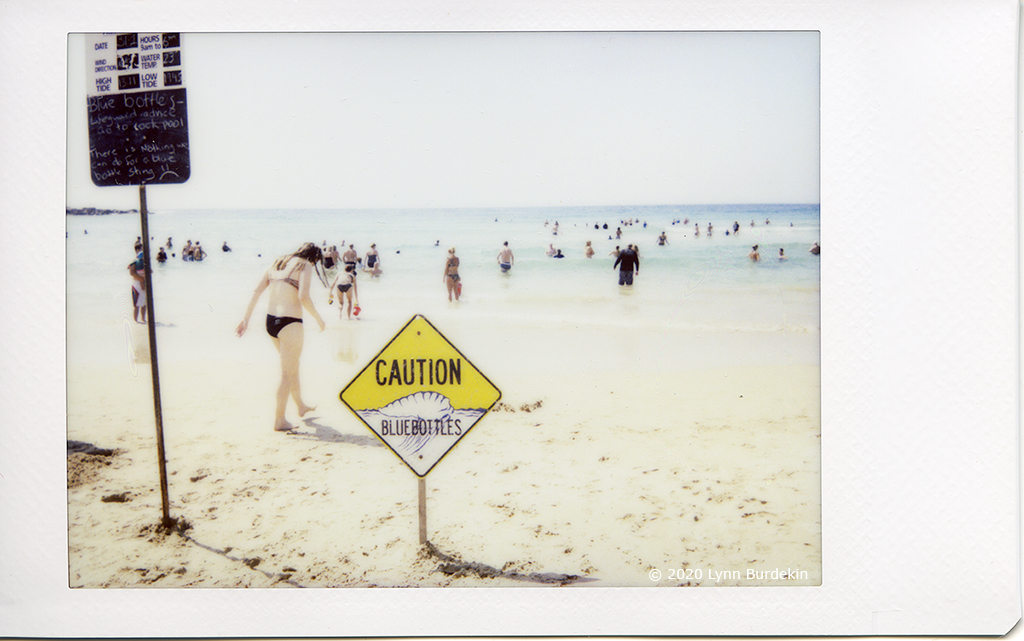 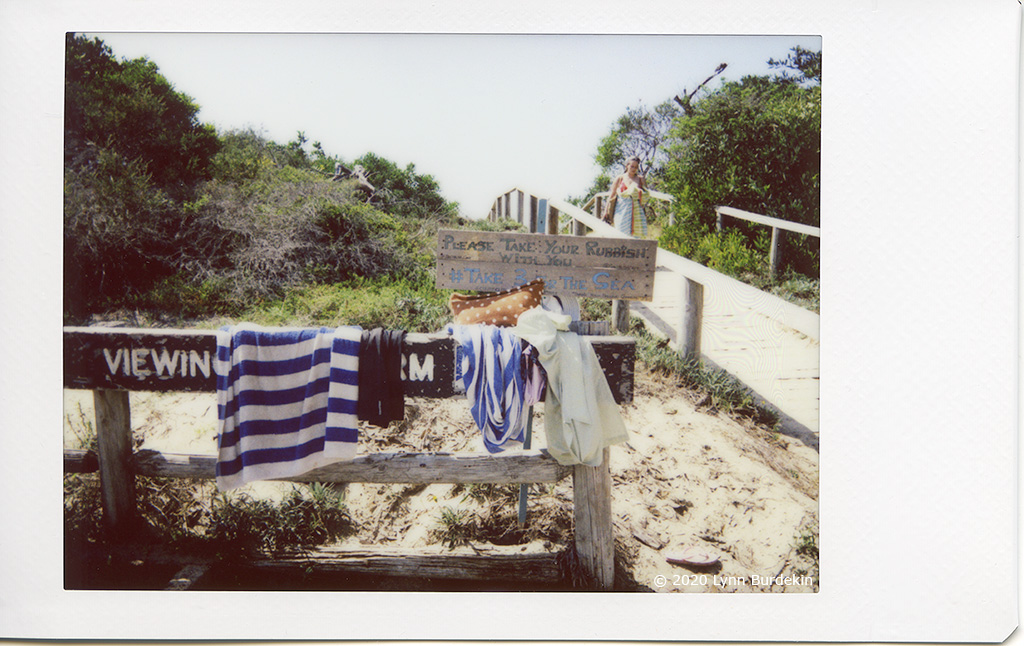 They're certainly that Jim. Later on I bought an Instax Wide 300 and an Instax SQ6 to get a larger image, but I still like many of the Instax mini pictures. I'll post some Wide and Square images later. They're certainly not Polaroid 250 or SX70 but neither is the cost per print - about 1/3 the cost of Polaroid/Impossible. And the Fuji colors are very nice.

View My Gallery
Picture #8. I wanted to see how blues are rendered. 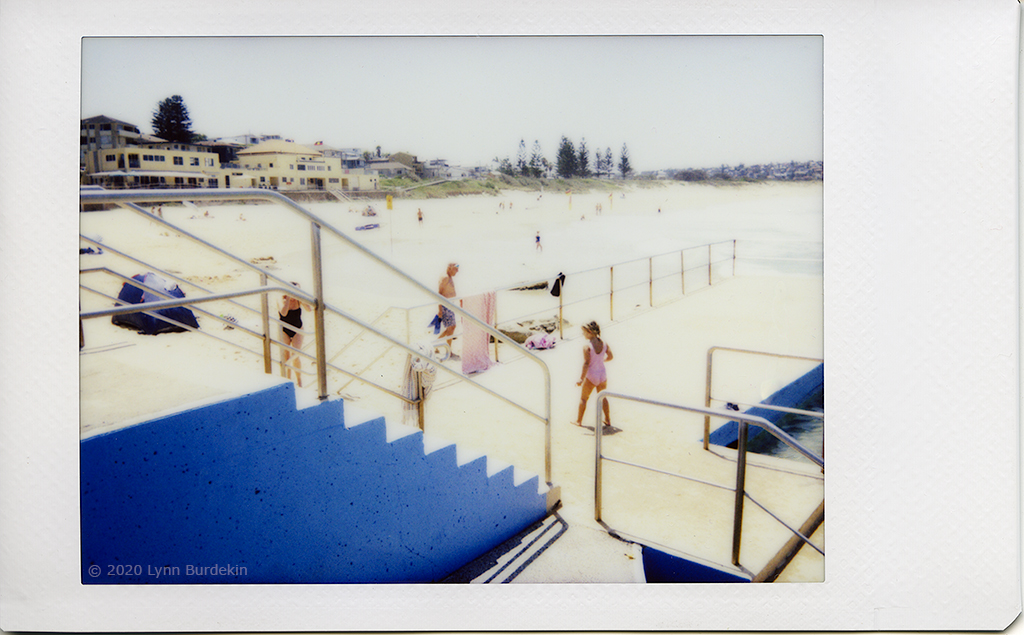 View My Gallery
Picture #11. Starting to get the hang of how to use this camera and film. The Mini comes with four plastic filters that snap on to the front of the lens. One is a close up diopter for selfies, the other three are blue, yellow/orange and red. I used the blue filter here to get the correct exposure, then adjusted the color in the scanned image. 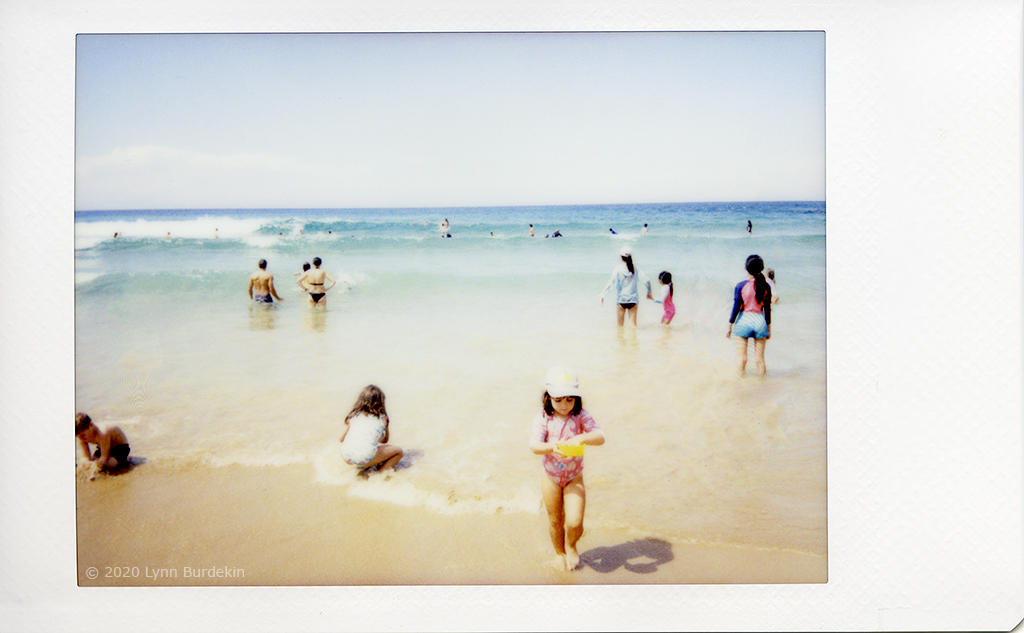 View My Gallery
Picture #19. Simple subjects suit the small 6 x 4.5cm prints. This is a "swim between the flags" marking the patrolled part of the beach for body surfers. 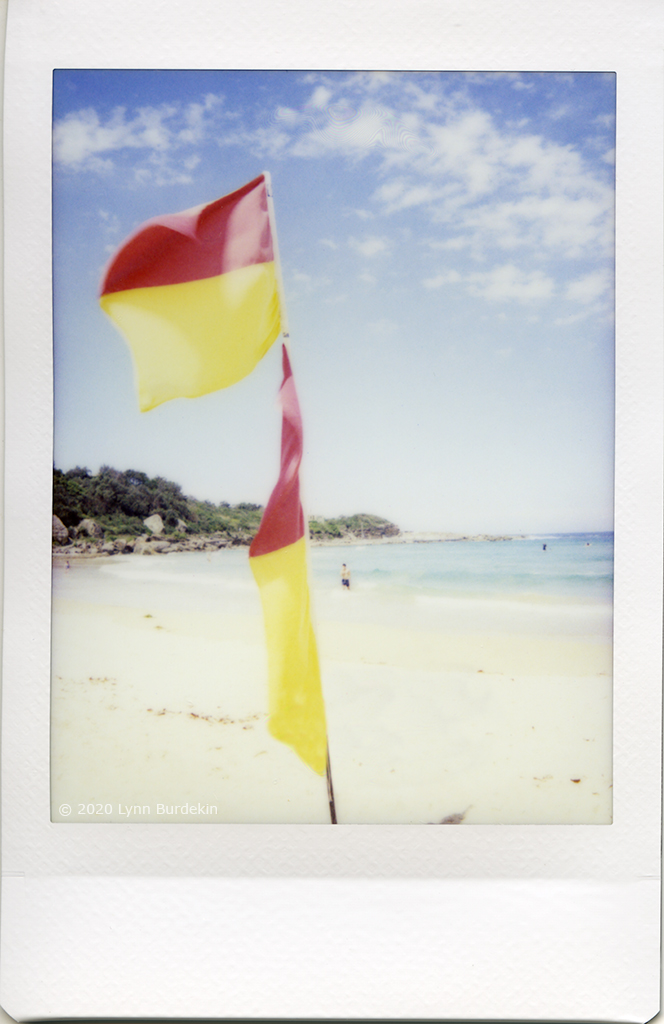 View My Gallery
Print #27. Fuji reds. Without filter in bright sunshine so it's high key. Those Newtons Rings are from the scanner. 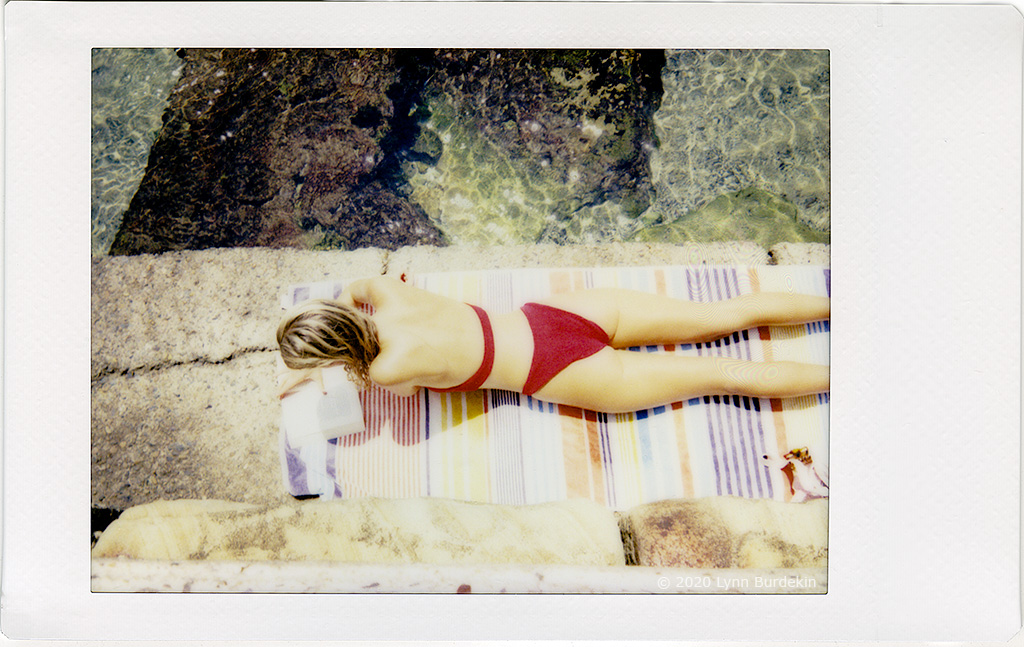 View My Gallery
Picture #14. As a street camera it's no SX70, but I like it nevertheless. This is Manly beach, Sydney.
EDIT: On the plus side, who ever takes notice of a bright yellow plastic camera. 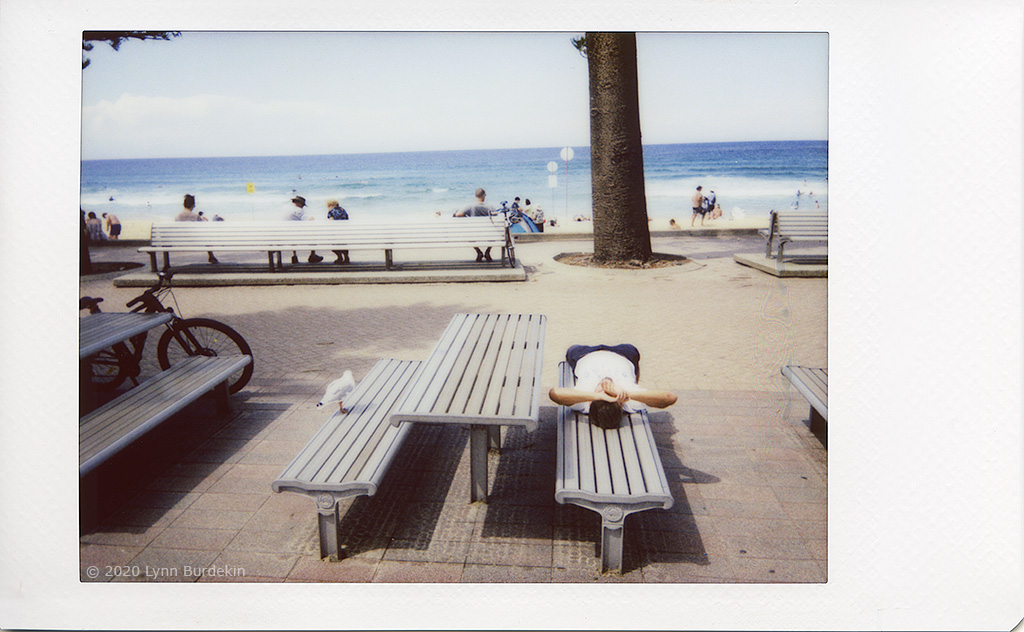 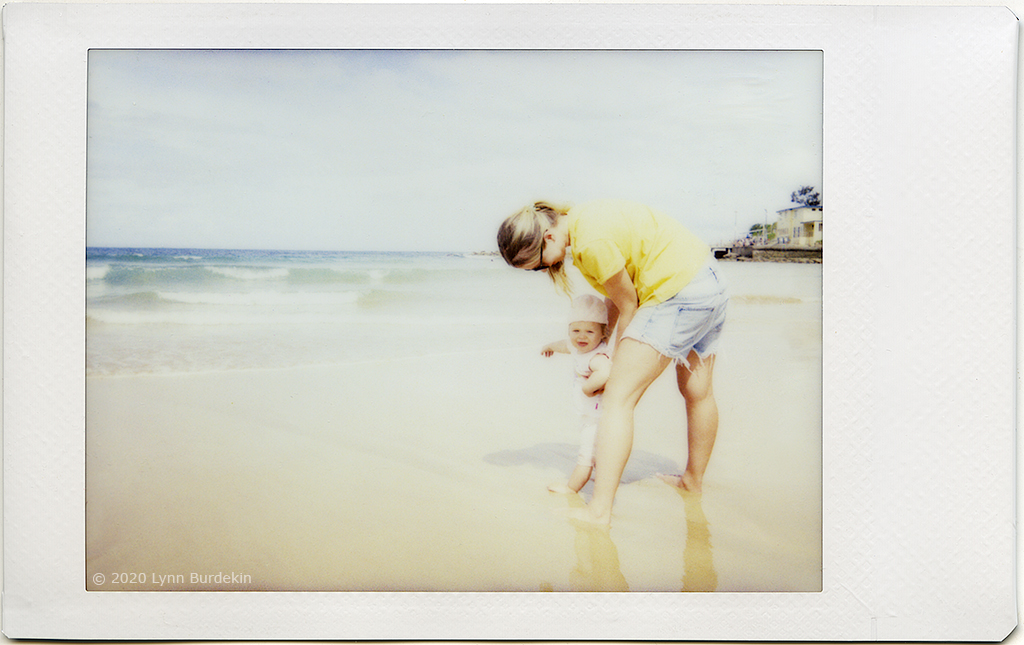 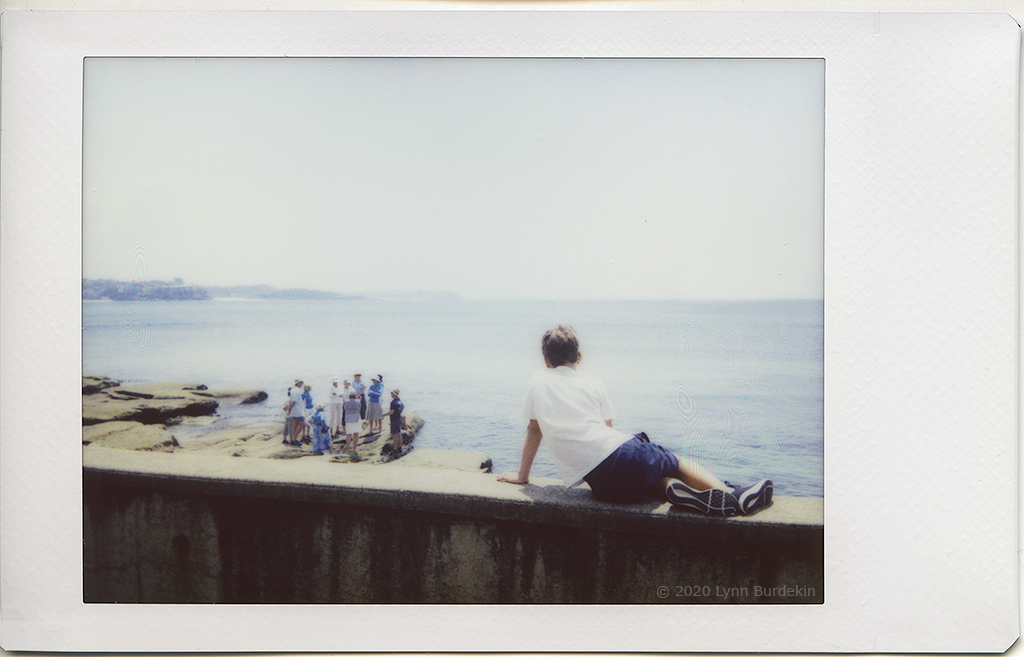 View My Gallery
Picture #38. Frustrated with overexposed pictures of the coast I held a deep orange 49mm filter in front of the lens, with the intention of converting to bw in post. The result exceeded my expectations. I prefer the drama of the orange filter. I did some dodging of the ocean surface in Lightroom: 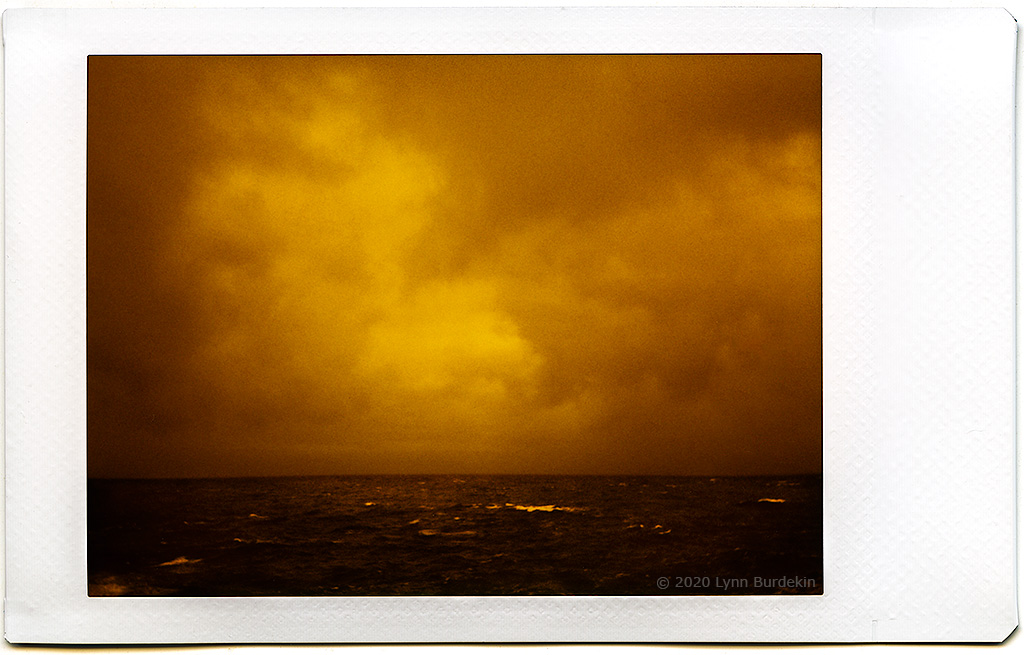 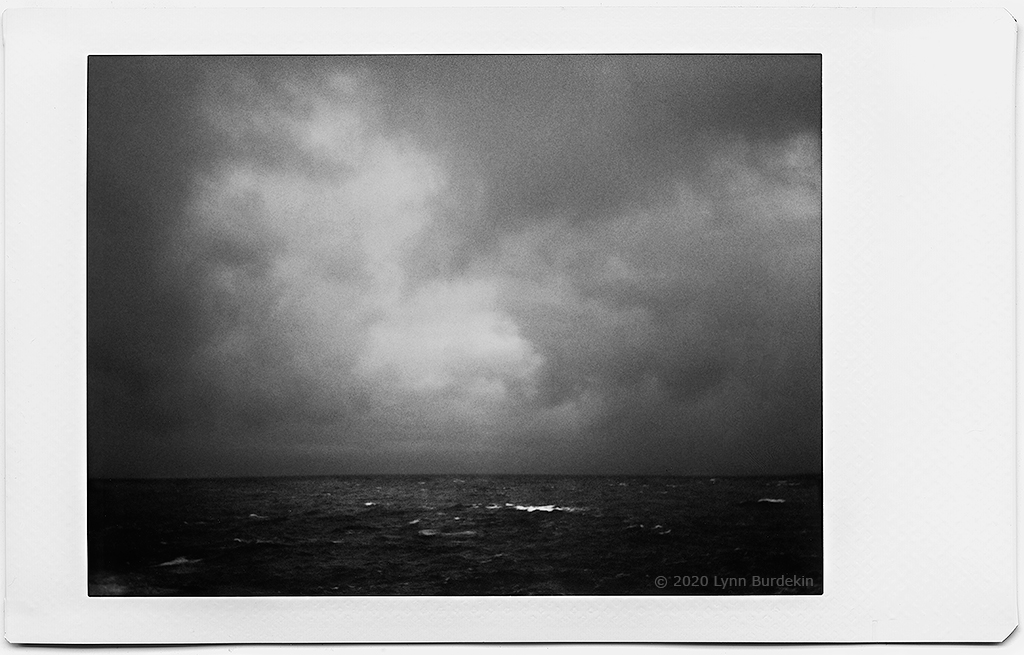 View My Gallery
Picture #50, my younger daughter's cat taken with the close up attachment on my first pack of Mini Monochrome film. The close up filter brings focus down to 30-60cm from the lens. Without the close up filter the focus is 60cm to infinity. She's an affectionate but mischievous cat. 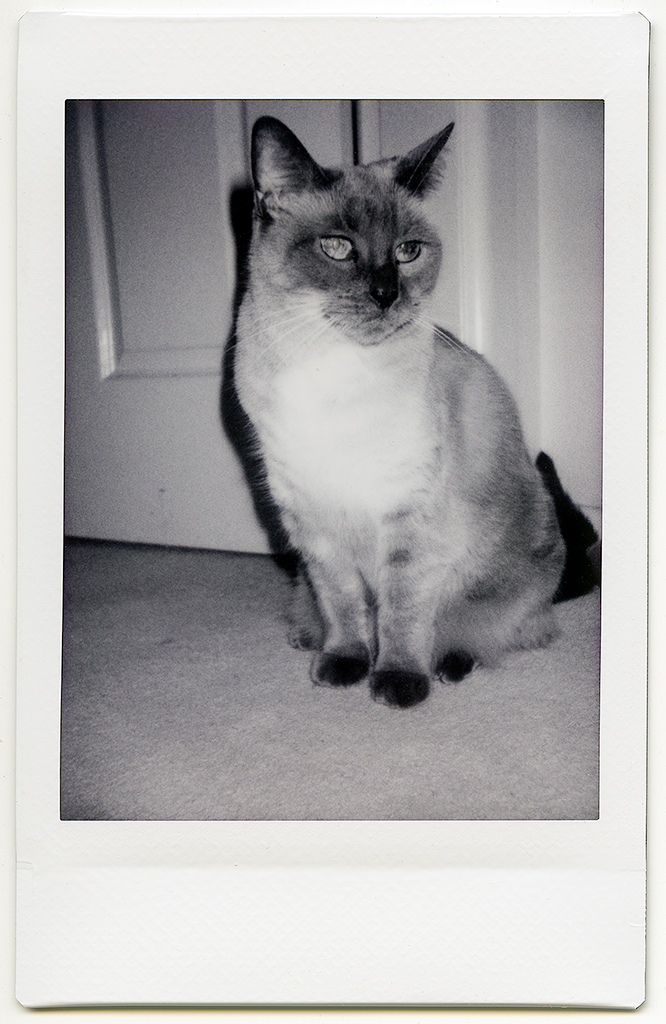 View My Gallery
Picture #64. Another Impressionist picture from Dee Why beach, Sydney. One of my favourite pictures so far. 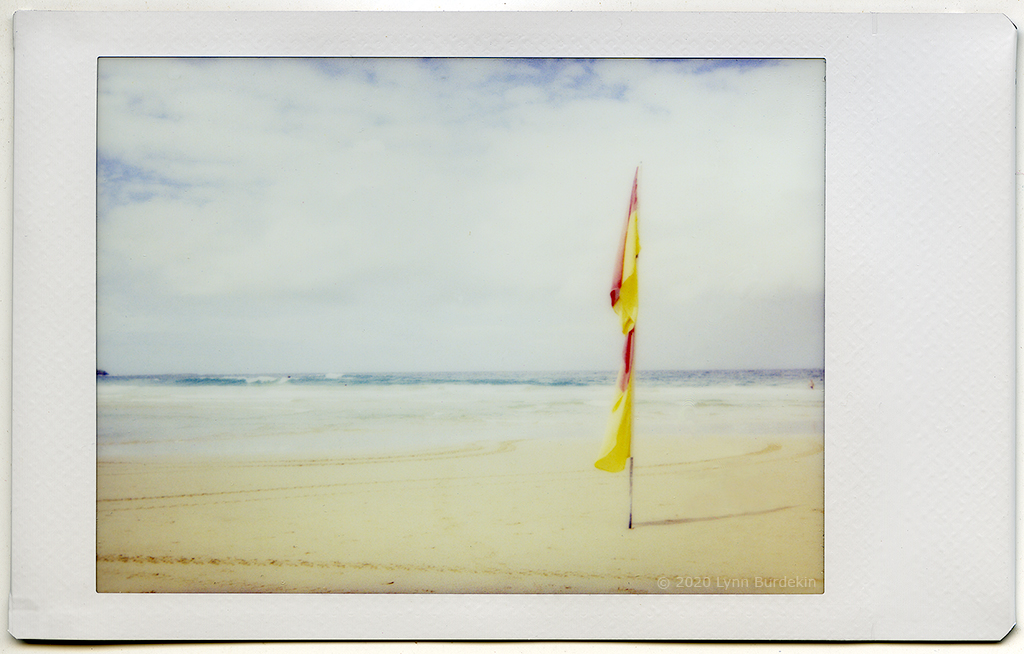 View My Gallery
Wonderful photos! You seem to have really come to grips with the luminous soft hazy look of the film and the perspective. I have one of these too but haven't quite been able to anticipate the outcome well enough to make any keepers, certainly nothing as good as yours. And yet its a very fun process. Thanks for sharing.

View My Gallery
Thanks Jeff! It was luck that my location near the beach and the light we get here in Sydney showed me the potential of the camera and film. I agree about the fun factor!